We welcome the opportunity to comment on the consultation on Scottish Building Regulations – proposed changes to Energy Standards and associated topics, which looks to improve the next set of standards for domestic and non-domestic properties across Scotland. These standards will make an important contribution to Scotland’s economic and decarbonisation targets, and we strongly support work to improve the energy performance of new and existing building stock.

Over the last several years, the rate of deployment of solar photovoltaic (PV) installations on Scottish new build properties has grown substantially. Major housebuilders and developers now recognise solar PV as one of the most effective and affordable methods to meet building regulation demands, as well as the multitude of benefits it brings to homeowners. New smart technologies and appliances that adjust energy use to make best advantage of solar generation, energy storage and the Time of Use tariffs offered by energy suppliers will only add to the benefits solar brings to residents

Based on EPC data, it is estimated that more than 60% of all homes built in Scotland in 2020 have rooftop solar, however the experience of rooftop PV installers in our membership suggests that this figure could now be as great as 80%.

However, this progress could be undone without careful consideration of the interaction between the proposed energy standards as outlined within this consultation and the proposed 2024 new building heat standard. The consultation sets out a gas boiler specification, which includes PV, and an air source heat pump specification, which does not. Our primary concern is that once zero emission heating (at point of use) becomes mandatory in 2024, housebuilders will effectively have no option but to transition to air source heat pumps and solar will be lost from new homes. To address this, we ask that Scottish Government reviews the regulation again prior to the introduction of the 2024 new build heat standard to increase  energy uplift requirements by adding solar PV to the heat pump notional specification. Otherwise, the interaction of the two regulations risks losing the benefits that solar on new builds has provided in Scotland, such as providing affordable energy bills and reducing emissions.

To deliver net zero by 2045, rapid decarbonisation of all energy demand alongside quick deployment of clean renewable technologies will be needed. As a result, the demand for electricity will skyrocket as heat and transport are electrified and electric vehicles (EVs) grow in popularity. Onsite electricity generation, such as solar, should be promoted wherever possible to alleviate any unnecessary expense to homeowners, reduce the need for expensive and complex grid reinforcement works, and enable climate targets to be met as quickly as possible.

Decarbonising the grid is a necessary step to achieving net zero, but the additional load implied by electrification could result in system-level strain on the network, absent major investment, and engineering works. This will also take years to deliver. Distributed, local, onsite power generation such as solar energy supports new and existing buildings to meet their own demand wherever possible, reducing strain on an already outdated grid. 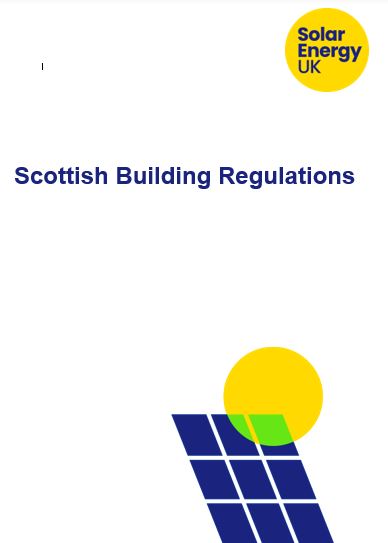