NPF4 is the first to be produced under the 2019 Planning (Scotland) Act, and incorporates the previously separate Scottish Planning Policy. It is likely to be current well into the second half of this decade, so the policy on planning and development it embodies must be consistent with the Scottish Government’s 2030 decarbonisation targets and advice governments have received from the UK Committee on Climate Change.

Solar Energy Scotland expects those targets to include ambition for 4-6GWof installed solar capacity across Scotland by 2030, with all the accompanying economic, cost of living, employment and climate benefits that will bring.

At a strategic level, the NPF4 draft sets four ambitions for placemaking across Scotland, all of which Scotland’s solar industry supports: sustainable places, liveable places, productive places, and distinctive places. The first of these sets out an intention to “diversify and expand renewable energy generation”, which is a welcome step forward from the language in NPF3. Climate mitigation via renewables should feature throughout these four ambitions, though, and not just adaptation.

First, higher priority for climate mitigation at a strategic level: Significantly elevated weight should be afforded to renewable development in the planning balance. Solar Energy Scotland believes that Spatial Principle (f) should also make explicit the need for planners to prioritise all renewable developments, as well as the grid and storage capacity required to secure maximum benefit from such projects.

Second, greater coordination with adjacent policy areas, including clarification on how solar and other renewable proposals will help deliver Scottish Government objectives on housing, heat, power, land use, and transport, as well as decarbonisation.

Policy 19, the element of most direct interest for renewable projects and decarbonisation, is internally contradictory. Sections A and B are consistent with the strong and positive language on renewables in the Sustainable Places section, but then subsequent sections systematically undermine those aims.

This is especially true of section K, which sets out 17 negative tests for each development to be assessed against. Many of those tests are simply the expression of good practice, or even legal compliance, and are already followed by developers. Unless this text is significantly reworked, it is likely to prove an obstacle to even the most uncontroversial renewable projects.

Permitted development rights should be extended to all rooftop solar projects, either without a capacity limit, or at least for projects at 5MWor below (such installations would still be subject to other planning rules).

Building regulations should include an affordability target for new homes and recognise the role of exported solar energy in environmental performance: this will help ensure new homes are cheaper to run and support a just transition to electric heating systems.

The requirement for solar installations to hold a building warrant should be removed if a certified charted engineer’s structural certificate (SER)is obtained.

End the practice of removing agricultural support payments for dual-use land, such as land used for solar generation alongside sheep grazing or biodiversity and conservation measures. 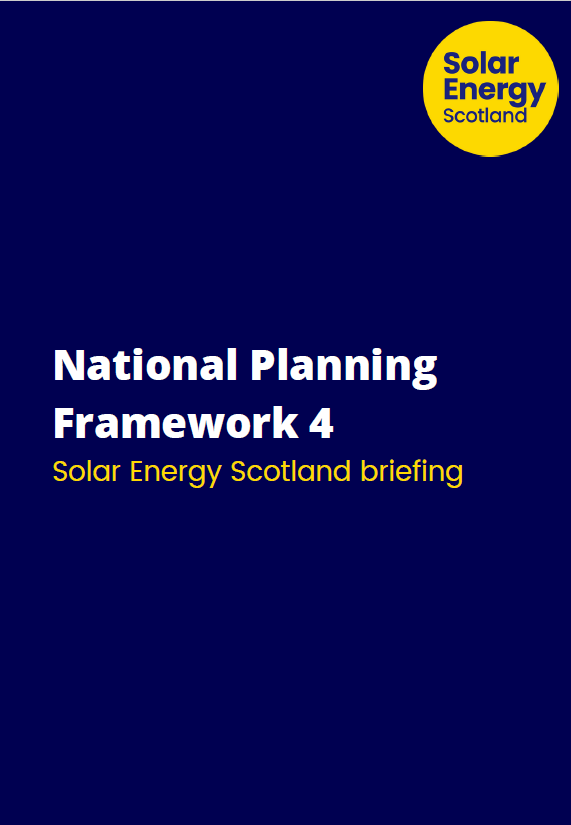