The UK currently has over 14GW of solar generation capacity installed, a significant contribution to its clean energy transition. Indeed, 663MW was installed in the 12 months to March 2021 alone – more than double the deployment between April 2019 and March 2020. The fact this growth took place during the first year of the COVID-19 pandemic highlights the strength of the UK solar industry, and the role it can play in the UK’s green recovery from the crisis.

However, analysis from the Climate Change Committee and other independent bodies shows that the UK will need to deploy at least 40GW of solar by 2030 if it is to achieve a net zero economy by 2050. Doing so will require installed solar capacity to triple over the next decade, with an average annual installation rate of 2.6GW. Solar Energy UK expects 10% of this to be deployed in Scotland.

This will be a major challenge, even with the solar industry demonstrating strong growth. Solar Energy UK analysis shows that the UK can both set and achieve a deployment target of 40GW of solar power in the UK by 2030. This would accelerate the decarbonisation of the British economy, demonstrate global leadership in renewable energy, and create green jobs and investment.

To address the barriers which are preventing the UK from reaching its full renewable energy potential, the British and devolved governments should prioritise implementing policy reforms as set out in the report below. 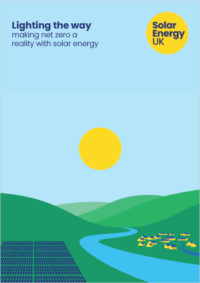 Solar energy has come of age as a technology. No longer in need of subsidy, solar is expanding across the world as one of the most flexible and affordable ways to deliver on climate change targets. This decade, 2021 to 2030, is critical for the prevention of dangerous climate change and solar is poised to play a significant part in that story.