The outcome of the Access SCR will have significant implications for distributed generation. There are three key proposals Ofgem is considering as part of the minded to consultation:

Our recommended solution would be moving to a fully shallow connection charging boundary for generation to meaningfully address the barrier presented by upfront costs to distribution connected generators. This would enable faster decarbonisation of the network and create parity between the transmission and distribution charging arrangements, thereby reducing distortions created by differing charging regimes. Charging demand and generation sites on the same basis would also simplify and expedite the process for connecting co-located sites, which we are starting to see much more of.

While the proposed reforms are welcomed, more clarity is needed on non-firm access choices at distribution. This would ideally allow some projects to connect more quickly and reduce the impact of curtailment. Consistency across DNOs and IDNOs with regards to the available non-firm access options is also critical to expedite and simplify the connections process for customers. In better defining access choices, network operators should also focus on providing connecting customers greater certainty of potential curtailment.

Better visibility on possible future constraints and how this interacts with Active Network Management regions is essential to facilitate uptake of non-firm access rights. For example, our members have highlighted the need for visibility of half-hourly data on constraints on grid supply points. We would underscore the substantial challenges that the current Active Network Management (ANM) schemes present, particularly for solar projects, as the level of constraint can often be unknown until developers have progressed projects further into the development process, which then poses further risk on the economics of a project.

We have serious concerns about the proposed Trasmission Network Use of System (TNUoS) charging reforms. As it stands, the proposed reforms are not fit for purpose and should be delayed to allow for a more comprehensive review. We would not support the proposed changes to charging TNUoS to SDG. As it stands the proposals would disincentivise generation projects in the north of England and Scotland particularly, which runs directly counter to the Government’s intentions of levelling up.

We also have concerns about calculating TNUoS on a MW Transmission Entry Capacity (TEC) basis. As TNUoS generation charges would apply to a generator’s TEC and not on a volumetric basis this will disproportionately penalise certain types of generation, particularly solar. The current proposal will only exacerbate TNUoS costs for generators in the north of England and Scotland and would hugely constrain Scotland’s growing solar industry. 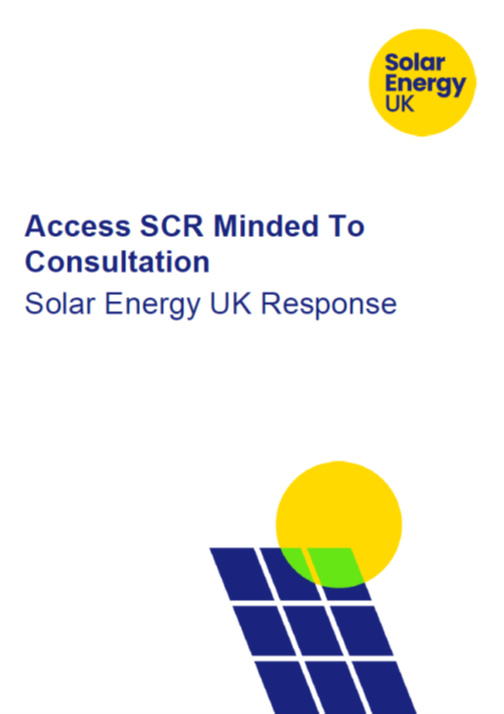